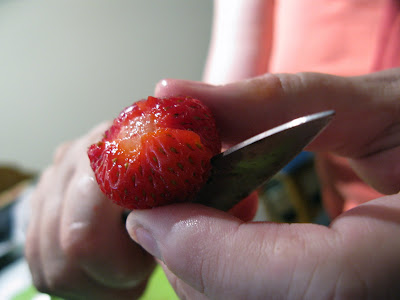 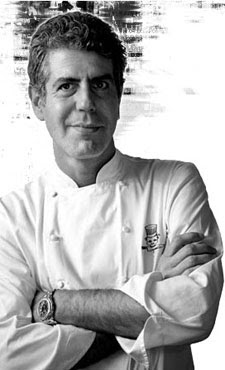 
THE INVITE:
Greetings Hungry Kiddies!
Oh News, News, so much news. First off, Karl and I are still married after the first BBQ here, so we thought we would try another. After watching weather.com like a maniacal bride all weekend it *seems* that it will be 87 degrees and sunny on Saturday (the one sunny day this week!) so we are obligated to have an outside fete, aren't we? If nothing else, just planning to be outside is sort of like taking a mood lifter, isn't it?
In other News: Time is ticking ticking in the march towards the release of Forking Fantastic! Put The Party Back In Dinner Party, Zora's and my first cookbook. (my first book!!) We are now in the crunch of needing already famous people to say nice things about us/the book on the back cover so others will be interested in buying it. Oh Fame! Oh America! And the kicker is, we have like... 2 weeks. Awesome. So, I need your help, oh well connected eaters.
Do you know Anthony Bourdain? Do you like me or Zora a teensy bit? If you Can answer YES to both of these, can you PLEASE make the intro? We would LOVE LOVE to ask him to blurb us, but amazingly, neither of us has ever crossed paths with him save that shoot we did at Ali's Kabab Cafe a few years ago and that was so early in the morning and we were eating sheep balls and looking like that was totally normal at 8am. Needless to say, we did not come away BFF with Tony. After all, as women, the stamp of approval from a cussing, swaggering, drinking man is....necessary. (America doesn't know us for the cussing, swaggering, drinkers that we are!!)
Even if you just know how to get hold of him that would be a great help. I am reluctant to stalk... Thank you thank you for your help in advance.
AND.... much smaller news, but fun. For the next 5 Fridays, (and last Friday) I am guesting on a blog called nakedapartments.com. No, it is not about swingers parties. I am writing a little dinner party column.

Check it out here.

Here is the menu for this Saturday. I hope to see your greasy little faces!

RSVP and address supplied with confirmation. No cancellations after Friday@ 3pm, please, I gotta get right with my butcher. In Love and Garlic... Tamara (Mrs!) 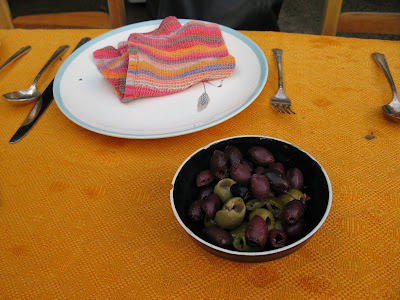 We held our first Sunday Night Dinner in the new apartment only six days after we moved in.

That is some crazy, retarded shit, yo.

What was I trying to prove? Anyway, dinner turned out great, it was so nice to see everyone and we took absolutely NO pictures. 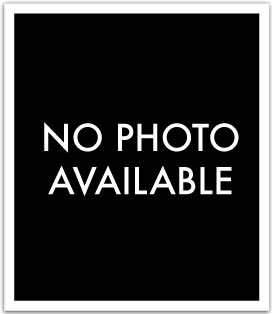 Cut to: The NEXT dinner, two weeks later.

It was notable for two wonderful things: Strawberries and Anthony Bourdain (No, not together, naked, in a mountain of whipped cream flavored with dark rum. That's another post...) 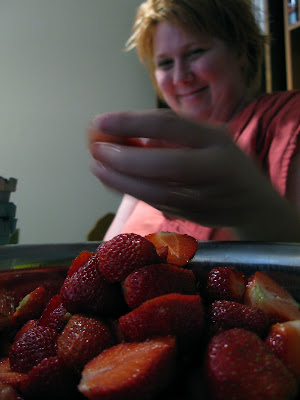 First, the Anthony Bourdain thing. We got our galleys for Forking Fantastic! and we had around 13 days to distribute them, beg for a blurb and pray to god that someone would take pity upon us, pick up/read/peruse/gloss over/browse the book, write something nice about it and/or us, and return said blurb in a timely fashion, so that the fine people at Penguin could put it on the back cover.
Apparently, the way to sell one's book is to demonstrate that notable (i.e. more famous than you) people approve of your book. I compare it in the humility scale to having to ask for a letter of recommendation so you could apply to be allowed to sing the Met auditions. Brutal.
We needed to get to Anthony Bourdain -- asap, and I realized that our email list was a great place to spread the word.

Three people replied instantly with his assistant's email address, but then, Patty Sunshine went one better: She called to say she happened to be in the same room with Bourdain at her job... editing his show (things like this never happen.)

I sprinted downtown, book in hand, and waited nervously in her office, watching Patty edit footage. After a few minutes, Anthony popped in to have a smoke, stayed to talk, and I managed to hand him a copy of the book and to ask for his endorsement. Oh, also, too... I had written a little accompanying letter listing ten reasons why he might want to consider blurbing our book. I was sweating that fear sweat, and I could hear that my own voice was much higher than usual, and all I kept thinking, over and over, was 'Ohmygodiamsuchanasshole.'

The next morning, at 8:30am, there was an email from Anthony Bourdain in my inbox. I almost peed myself. I immediately phoned Zora and Peter (generally, a NO NO until at least ten a.m.)

I forwarded the email around like it was notice of a full ride scholarship to Oxford. And here are the words that made me all swoony:

"This eccentrically enjoyable book by two strange and wonderful women may well be the cookbook America needs right now.

Fun, deliberately unintimidating and filled with interesting -- even ingenious -- recipes, it inspires the non-professional to raise their game--and have a good time while doing so. Both book and authors are clearly good for the world. "
- Anthony Bourdain

It was like a New York Miracle. And we weren't even on 34th street!

The other wonderful thing was the strawberry dessert.

I tried some strawberries at The Greenmarket and they were pretty good. I say 'pretty good' because I went to France this May, and was served THE MOST LUSCIOUS STRAWBERRIES OF ALL TIME.

Had I never tried THE MOST LUSCIOUS STRAWBERRIES OF ALL TIME in France, I would have thought our Greenmarket strawberries were really excellent. Now that I have been shown the light (by a sixty year old waitress wearing espadrilles, no less,) I can say they were only 'pretty good.'

However, if you bake a buttermilk biscuit, whip some heavy cream and blend with dark rum, vanilla and powdered sugar and top the whole thing with some fresh strawberries, 'pretty good' can be transformed into a first date that lasts a week! 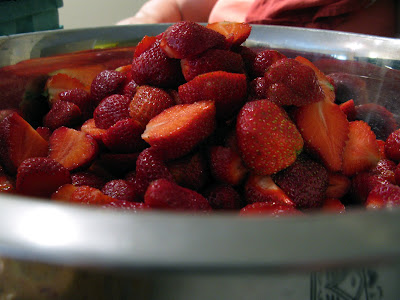 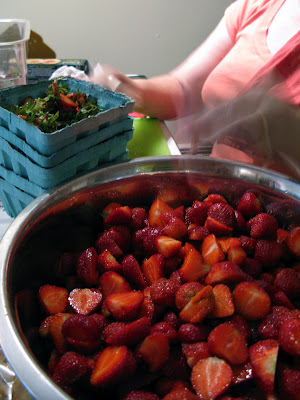 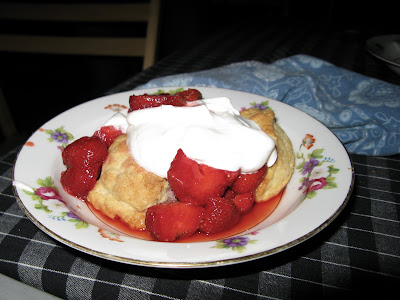 The rest of the dinner was vaguely Turkish, a kind of cooking I always associate with the summertime. I have never made grilled kebabs (I know -- weird) and I was intrigued by a yogurt/aleppo marinade recipe that I read about in Food and Wine. 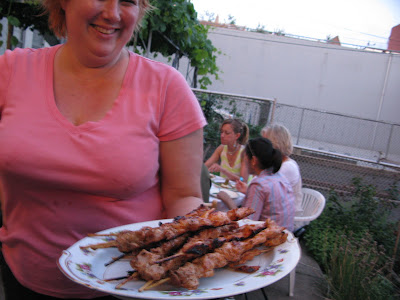 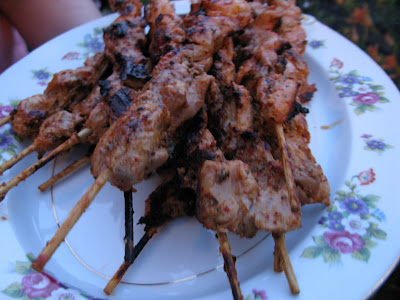 Halloumi is a Greek cheese that tastes SO FUCKING GOOD with a hard, grilled crust on it, and grilled romaine lettuce tossed with mint vinaigrette accompanied it perfectly. The char of the romaine, the burn and melt of the cheese, the brightness of the mint vinaigrette... Magic! 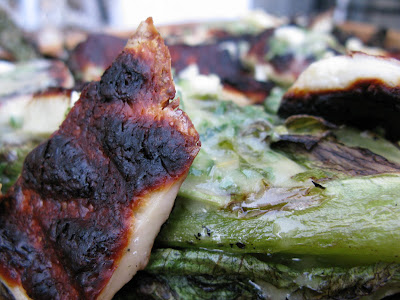 Grilled green onions from the greenmarket with just salt and pepper. 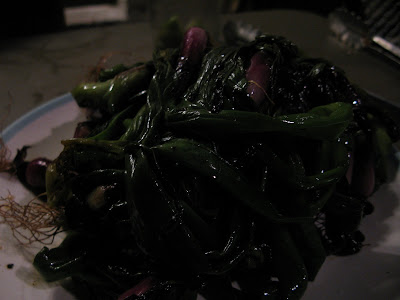 A Greenmarket salad with cucumbers, radishes, and an herbed buttermilk/yogurt dressing. 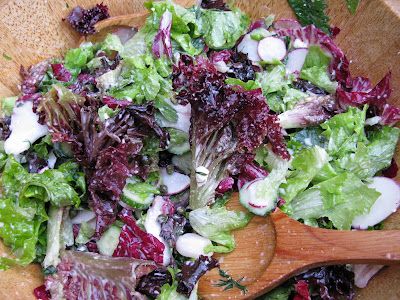 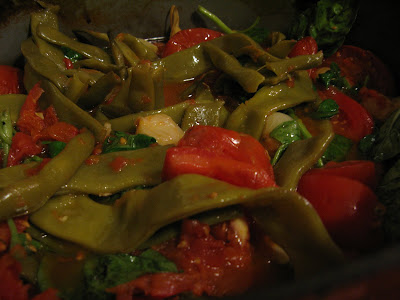 I always want to eat slow cooked romano beans with tomatoes, garlic and basil, so I put that in play, and I found some fabulous Za 'atar flatbreads at the Trade Scare. 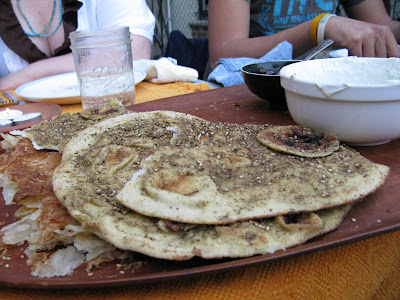 I also found fatir there, which is like you imagine a croissant would taste if no one sliced it into pieces, and just left it flat. 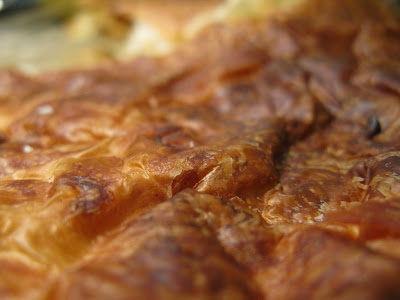 Butterly, flaky, doughy goodness.
There was brief weather/drama in the beginning -- We were ahead of schedule, the tables had been set, Karl lit the fire and POOF! The sky opened up and everything got soaked. (Everything but me; I managed to remain inside). After much discussion/hoping/praying, it cleared up and we managed to have a lovely second dinner in our new garden, with tiki torches and everything! 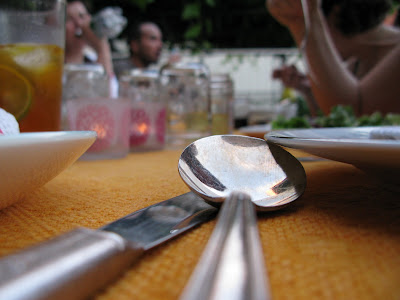 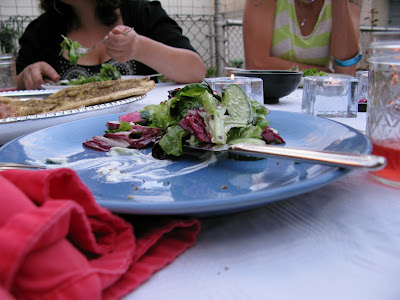 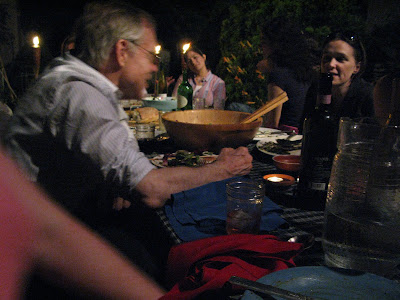 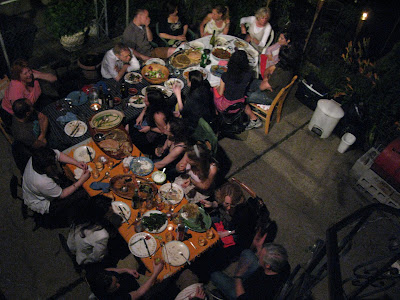 Posted by Tamara Reynolds at 11:04 PM

That was such a good dinner. Thanks again and congratulations on the Bourdain score!