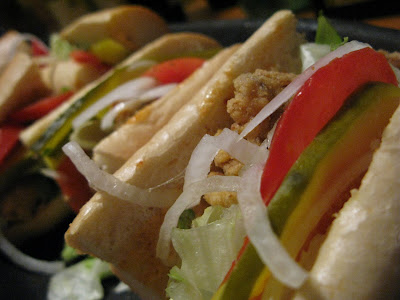 It was Victoria's idea, actually.

I was thinking of cooking, but had no idea what, and she said:

"What about something New Orleans in honor of Mardi Gras?"

It seemed especially fitting, because one of our SND alums, Dan Baum, was in town for Fat Tuesday, reading from his very well reviewed (and beautifully written) book Nine Lives: Death and Life in New Orleans at the UWS Barnes & Noble.

And, that got me thinking about the first time I met Dan and his wife and co-writer, Margaret Knox.

About 3 years ago, we joined Peter & Zora in New Orleans on a last minute whim to watch their friends Jim and Daphne get married at a wax museum. We got a last minute package with Travelocity, I think; One of those 'flight plus hotel' deals for a song. We had no initial plan to go to the wedding - we were just going to soak up the sun and eat ourselves silly.
Well, it ended up being three glorious days of bike riding, all around New Orleans, an amazing biking city because it is relatively flat, which makes it easy to tour. 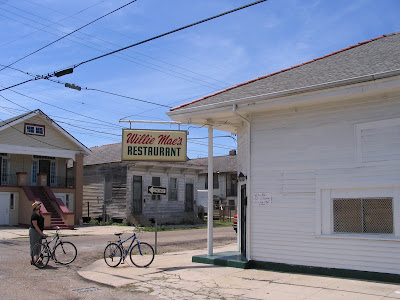 Plus, after spending all your time eating Po'boys and drinking, you NEED the exercise. 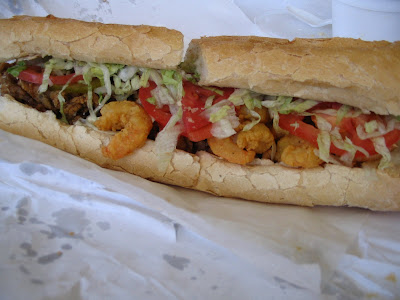 A New Orleans-born, half shrimp, half oyster po'boy. Good god, y'all.

On Sunday, Peter & Zora's pal Dan invited us to join a Second Line somewhere way out -- I can't remember where, just now. I just remember trying to catch up and getting frequent calls from Zora, saying, "Now we're on such and such corner," as the parade progressed. I think the group parading was The Ladies Pleasure Club, and it was spectacular. 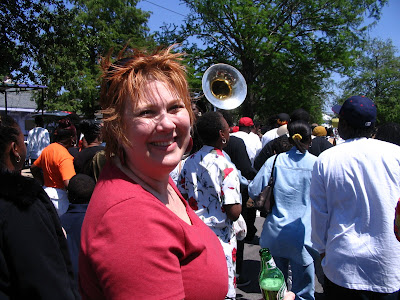 The women were all dressed in white, and dancing/walking down the street, stopping at houses along the route for a breather and refreshments, the band playing along, and the BBQ truck and guys rolling wagons full of beer and ice for sale in step too. 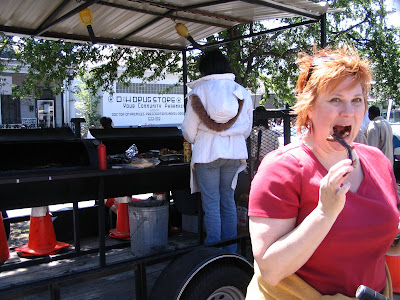 Why don't we do this in NYC? We ate BBQ, and drank beer, and walked along... it was such an amazing experience and without having been invited by the "Knox-and-Baums," we never would have gone.

Oh, and we did get to crash the wedding too. Marvelous. Merveilleux.

Since our trip to NOLA, I have cooked Gumbo a few times, Jambalaya a few more, and lots of other Louisiana food, but never Po'boys. Why not, right? Why can't we have fried oyster sandwiches on a Sunday afternoon? Funny how sometimes settling on a single menu item makes the rest fall right into place.

I got some crawfish from my man Vishnu. There were no live ones available, so I settled for frozen ones. When boiled for just a few minutes in spiced beer and water, they turn out sweet and tasty with a spicy shell. 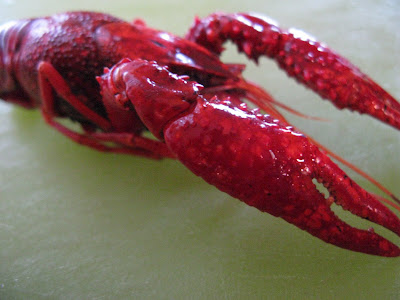 Mmmmmm.
I had planned to haul ass to the Hunts Point Fish Market at about 3am on Friday morning to buy a gallon container of shucked oysters from my boyfriend John at the Blue Ribbon Fish Co. John has a fish hook hanging around his neck with his name carved into it, and he wears a fedora!!

When it got down to it, though, I couldn't stay awake and no one really wanted to go with me, and although I am generally pretty fearless, the Market is one of the few places I don't want to go alone. Millicent wisely suggested that I call Wild Edibles Wholesale, instead, and see if they could spot me, and they did.

Karl and I went up to Steinway Street to borrow Ali's car, which resulted in me borrowing the car for the trip to Wild Edibles, and Karl staying at Little Alexandria Adult Daycare a.k.a. the Shisha joint, with Ali. He smoked the apple flavored, or "girly" tobacco, and got to meet everyone coming to see The Mayor (Ali.)

By the time I returned, Ali had prepared family meal and he invited us to stay... It was so nostalgic for me, I was all ready to hear about the specials and wondered if we were going to have a wine tasting and pop quiz!

But, back to SND... The menu was a bunch of no-brainer staples, but was an excellent reminder that it ain't gotta be fancy to be good.

Red Beans made with smoked pork necks, garlic and pickle brine (yes, you read that right); 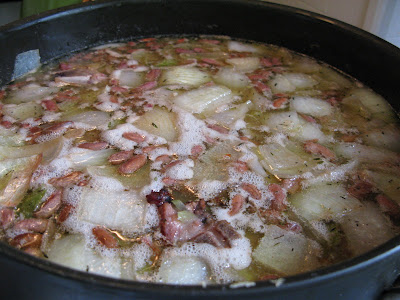 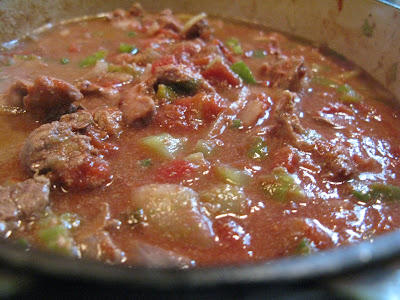 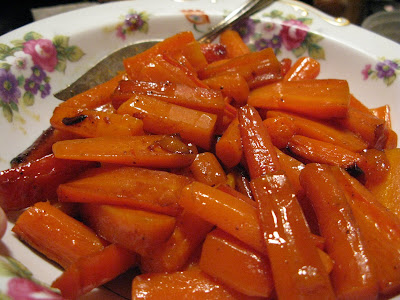 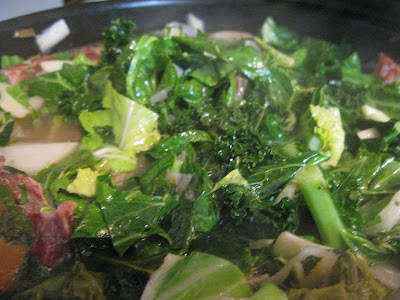 Fried Oyster Po'boys with Chipotle Mayonnaise and (not for the faint of heart) optional Veal Gravy; 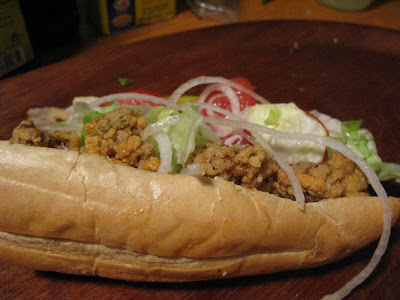 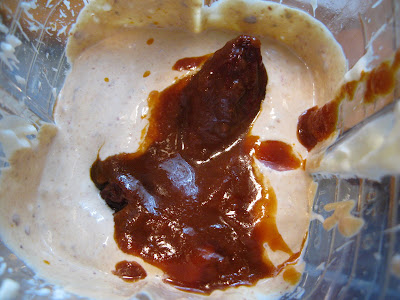 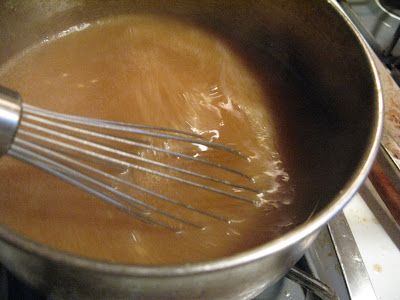 and one of my all-time, old school Frenchie faves: Celery Root Remoulade. 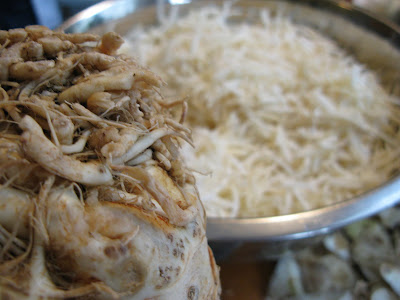 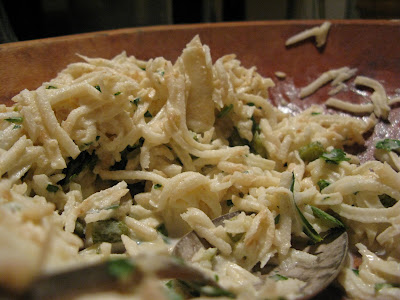 I never do a dinner without learning a few things, and this one was no exception. the most amusing thing I learned is how many fucking people freak out about Bananas Foster. Who knew? 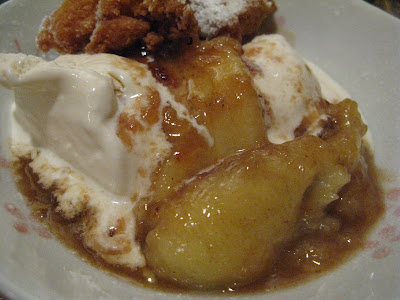 There were at least five people who came solely for that. One guest told me to "prepare for Banana Fosters Rage". (I think that is like a rave, but without Ecstacy).

Seriously, even after eating lovely little beignets, hot from the pan, these people were like wolves in winter when the Foster hit the table. 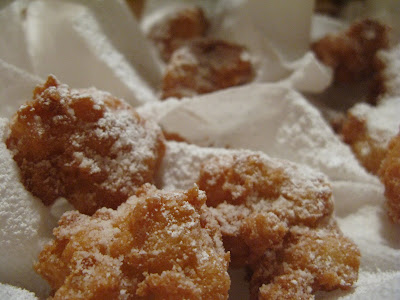 As for me, I also learned that as cute as all of my little taped lists are on the cabinets, when the flames are licking at them from the Bananas Foster pan, it is not so cute. It is unnerving at best. 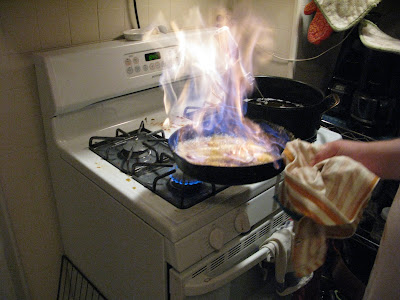 I also learned (again) that, just as Zora and I wrote in our book, whenever you are multiplying a recipe, make sure you factor in the TIME too.

It takes a Long Fucking Time to fry one hundred and eighty oysters, as it turns out. 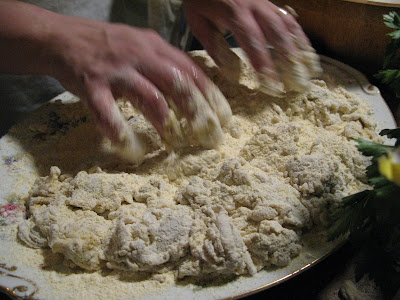 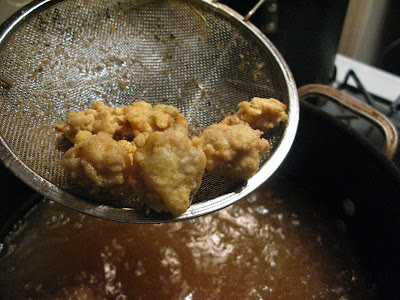 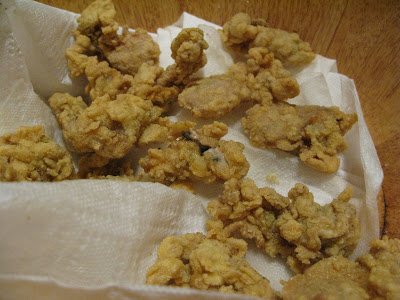 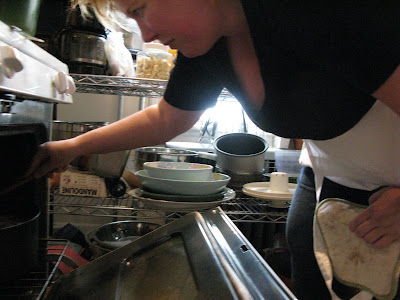 Despite a couple of last minute cancellations, it was overall completely delicious, everyone left fat and happy, and I was sitting on the sofa, watching Big Love and drinking a glass of wine by 9:45 pm.

Not bad for the first Sunday of Lent, huh? 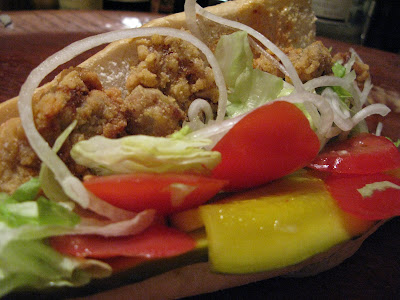