Once More Into The Breach! The Magnificent Lamb Roast!

(Another post from January. Clearing out the posts that got lost in the shuffle as Karl and I move this week. Enjoy a lamb roast, in 23 degree weather. Ha!!!) 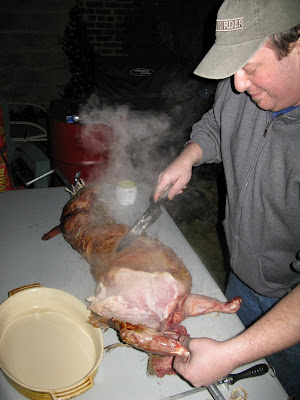 It inspires excitement and admiration in the hearts of Greek shop owners in Astoria (and beyond, I suspect), inspires wonder in the hearts of our fellow SND diners, many of whom have never SEEN a whole animal of any kind on a spit, and, finally, inspires frenzied planning, and -- I can say it now -- more than a little dread, in both Zora's and my heart, this time around.
In the past, we have undertaken the roasting of a whole lamb on a whim, or for a special project, or for a Turkish wedding reception, or just... because we could. This time it was different.

This time, it was for The Book.

We had no idea that our little dinner parties would ever be anything other than dinner parties, so we didn't keep much of a photographic record. (Karl would interject here that I met him in the nick of time!) The lamb roast pictures we did have weren't good enough for the book. And... we were down to the wire, deadline-wise.
Enter: the Lamb Roast -- in January. 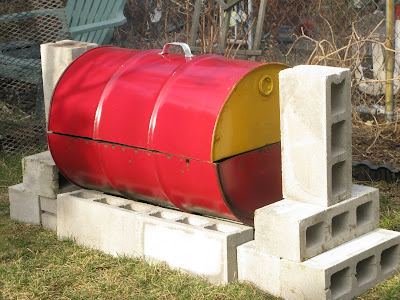 Initially, the roast was scheduled for January 18th. But as the date approached, the weather got colder. I kept refreshing the Weather.com link like a crazed woman in desperate need of a beach vacation. When I saw that the high was going to be 25 degrees, I threw in the towel. We decided it was too cold for anyone to be outside for the five hours it would take to manually crank the lamb, (Zora said, disdainfully, "It's Indiana cold!") so I emailed all of our eager little lamb fans, told our editor not to expect any pics yet, and rescheduled dinner for the following Sunday, January the 25th.
Some people dropped out because they were leaving town, but most of them rescheduled. We filled the empty seats with wait-listed people. We had to turn people away (sorry!)

Unfortunately, as the blessed day ticked closer, IT GOT EVEN COLDER.

Like, really fucking cold. Day of the lamb roast, the high was 23 degrees. I know that for you Chicago readers that sounds balmy, but give me a break: I'm from Phoenix!
Lucky for me, I wasn't going to be doing any of the actual turning of the little lambiekins. I was going to be in the kitchen with Zora, busting out all of the other food that needed to be tested and photographed. 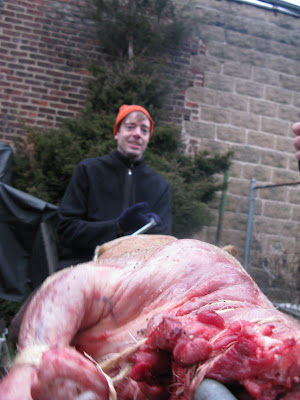 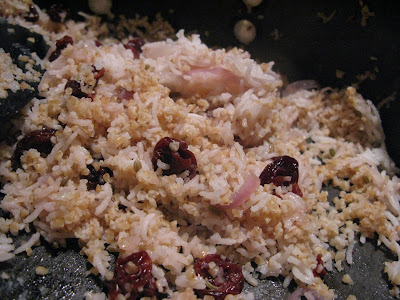 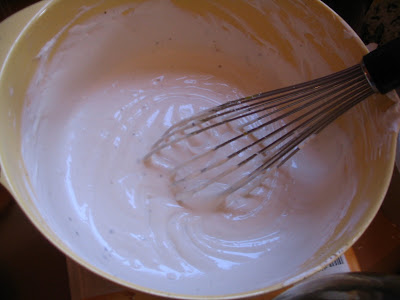 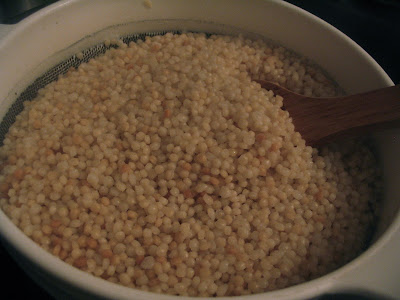 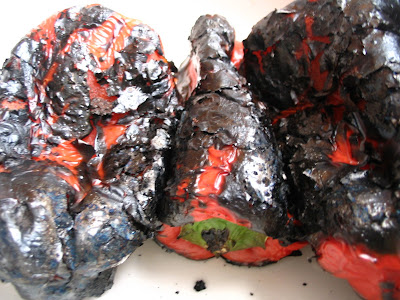 Dates Stuffed with Almond Paste and Orange Flower Water (Neil Doshi told us to heat the dates-- he is a genius!!!! Don't think that didn't go right into the cookbook, because it DID!)

Apples with Chestnut Honey, and... 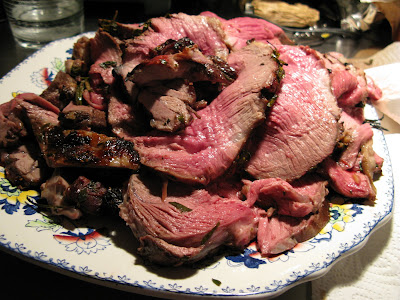 
In the end, it was 4.5 hours of hardcore spit turning, the majority of which was done by Dapper Dan (put enough booze in someone's hot cider and they will do almost anything!) We got the pictures we needed, and everyone was fed. I confess, this dinner had a little bit of a backed-up-against-the-wall feeling for me at the time, but now that I have a little distance, it wasn't so bad. (People say that about prison too, don't they?)

I think the most amusing moment of the day came at the local hardware store on Steinway that Sunday morning: Standing with my mug of coffee, buying 12 cinderblocks. I paid for them and was waiting in the warehousey part where they bring you the shit you have paid for, and alongside the obligatory girly pinups was a picture of... President Obama! 2 pictures, in fact! There was one of just him and another dancing with Michelle at the inauguration. I fucking loved it! When was the last time you saw a pic of the Prez next to one of Miss Goodwrench 2009??

Look for the next lamb roast when the weather is warm again... (Hey! That's now!)

Posted by Tamara Reynolds at 9:15 AM No comments:

Welcome 2009.... Italian Style, Or... Everything I Learned From The Italians, Without The Pasta! 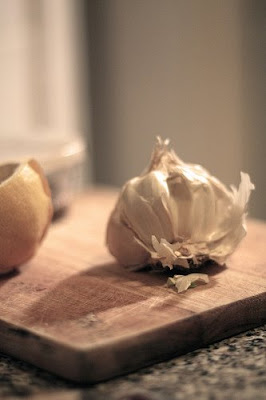 ***Karl and I are moving this week. It seems to be the natural time to clear out the blog of all of the posts that got lost in the shuffle. This one is from the first SND of 2009, January 13, to be exact. Winter in a rainy spring. Enjoy!

My mother's family was from Wisconsin, by way of Austria, and that connection primarily manifested itself in her fabulous pastries, and the occasional sauerkraut/sausage concoction. My father was a chef, so he didn't cook much at home, and didn't have a specific national specialty.

In college I met Victoria, whose father was from Sicily. They had such a rich culinary tradition (it makes me laugh to remember all the times I visited Victor and Dottie, and left barely able to carry all the food they packed for me).

One night, shortly after we met, Victoria taught me how to make "sauce."

I will never forget her yelling in horror that my sauce was 'dirty,' and what in the hell was I doing? I had no clue that she was talking about the seeds in the tomatoes.


Victoria and her father Victor eventually taught me how to make all sorts of dishes I never knew about. Charred Green onion salad with Anchovies and lemon slices. Fennel Salad. Orange Salad with Oregano and Red Onion.... I am forever grateful.

Everything Good I Learned From the Italians.. without Pasta!

I was holed up in the snowy wilds of Vermont with friends for the New Year. It was divine! I took the ridiculously gorgeous new cookbook Olives and Oranges by Sara Jenkins and Mindy Fox with me-- my Christmas present to myself. Years ago, when I was working at Fressen, my friend and then boss Lynn Mcneely took me to an after work dinner at Prune, where we met Sara Jenkins. What I remember most about that night is that Sara was on her way to Sicily to watch the tuna run. Talk about a free and dedicated spirit! From then on, I ate wherever she was cooking whenever I could. I am thrilled to report that her cookbook is just as interesting and excellent as I thought it would be, and it reminds me of all of the amazing regional Italian food that doesn't get a lot of attention.

I have also been fortunate to have Victoria and her father Victor, (from Sicily) as culinary guides for many years. Some of their food is on this menu as well.

So to ring in the New Year at the dinner table, join me this Sunday, January 11 for an all Italian meal, dishes that I have taken with love from my friend Victoria and her father, Victor, and Sara and Mindy. 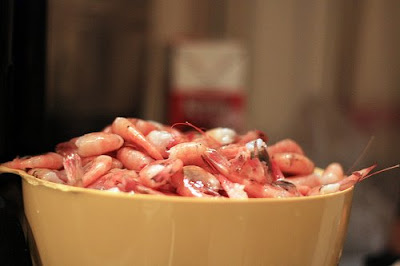 Those little shrimp were the BOMB. Just quick sauteed in super hot olive oil and garlic, with aleppo pepper and salt finishing them. Like spicy popcorn, but shrimp! Thank you Olives and Oranges! 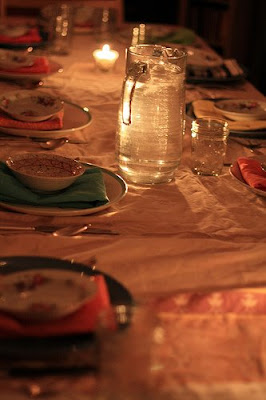 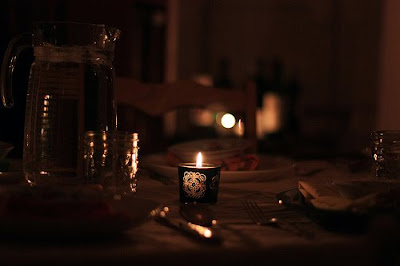 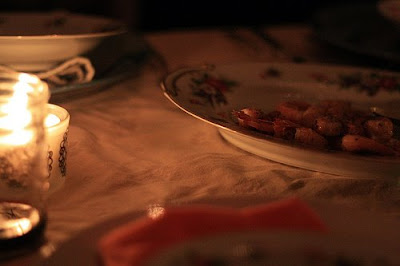 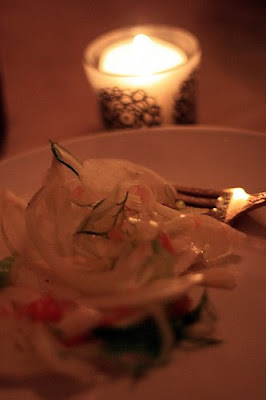 The ruins of a plate piled high with cranberry beans, potato, pepper and oil cured olives, and orange oregano salad. 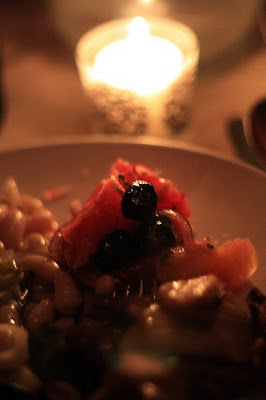 Slow roasted Heritage Pork. Unbelievably delicious. White wine, garlic, rosemary, thyme, five it all a rub with olive oil and toss a couple onions in the pan. Roast for hours and hours on 250. It will melt in your mouth. This little piggy is worth every penny, plus you are helping to save the breed by eating it! 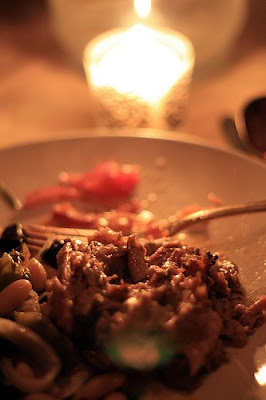 Sliced Bosc Pears with Shaved Pecorino and Chestnut Honey. The honey has an earthy, foresty almost petrol taste to it, like some Rieslings. Paired with the pears and the pecorino.... excellent. 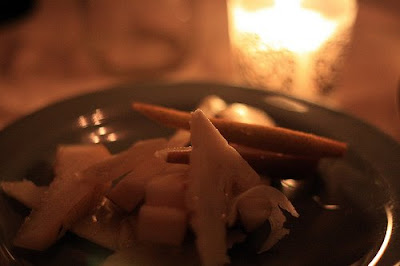 Beautiful escarole roasted with anchovies and garlic, finished with lemon. 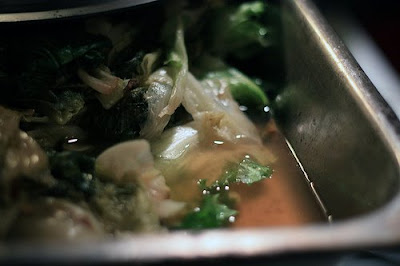 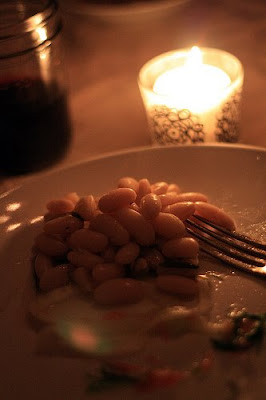 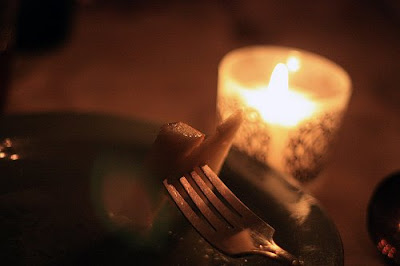 Posted by Tamara Reynolds at 9:01 AM No comments: