When I moved to New York City fifteen years ago, I had never heard of Ramadan.

The first time I had heard of it was when I was working as a waiter at Union Pacific restaurant (the ageless Rocco DiSpirito was its celebrated chef.) Family meal was going to be served a half an hour later than usual during a few weeks in November and December, and we were instructed not to clear food away until after the "Muslim dudes" had eaten. When I asked why the entire prep staff were suddenly eating separately, a very helpful restaurant lifer said, "Because it's Ramadan."

The following year, I was working at Babbo when Ramadan began, but unlike at Union Pacific, just a few of the prep staff were Muslim. This time I just asked one of the guys what was up. He kindly explained the month-long, daytime fast, only eating at sundown. I remember thinking that it was kind of hardcore, fasting for an entire MONTH, and it made me glad to be Episcopalian...

Two years later, I was living in Astoria, eight blocks from Steinway Street, or "Little Cairo." I moved in during the middle of Ramadan, and I had gone to Steinway Street looking to buy a tart pan or some bullshit. I came away wondering why everyone had been crazy rude to me, and I couldn't understand why. It wasn't until the following year, when Ali from Kabab Cafe explained to me that, as Ramadan wore on, people might start to get a bit... touchy towards the middle of the day.

Got it. They were hungry.

As someone who wishes they had been raised in more of a culinary tradition, I always enjoy immersing myself in those of different cultures. It's the food version of dress-up.


Keeping tradition is important. It gives us all a sense of belonging and perspective, and being part of something larger than yourself makes us understand that we are a part of the continuum. Culinary traditions also help us understand politics and social change; Which countries traded with/were influenced by/occupied by whom, etcetera.


A great example of the interplay of food and culture is how Italian-American cuisine differs from regional Italian cuisine, mainly because that when Italian immigrants came to America they suddenly found themselves in the land of plenty... Surrounded by MEAT! Italian immigrants incorporated American produce and ingredients into their traditional cuisine, and added more meat to pasta. Meat in sauce. Every kind of meat! Spare ribs! Pork! Veal! Sausage! Meatballs!  This isn't the same cuisine that you find in Italy, simply because the ingredients weren't available for working class people in the same abundance.

But, back to Ramadan, the Islamic month of daytime fasting (no eating, and also, no smoking or sex) which is broken with nightly feasts after sundown. After the sun sets, you can smell cumin, garlic and spices all over Astoria. I woke up one morning in late July thinking of Persian Fried Chicken, and realized that this would be the perfect occasion to whip out this showstopper. Who needs more inspiration than that?

Karl recently brought home the "Purple Citrus and Sweet Perfume" cookbook by Silvena Rowe, and this meal had many recipes inspired by it. I won't lie, I had mixed results, but for recipe ideas, this book is fabulous.
First up-- The Swiss Chard Falafel. Turns out, Falafel is clearly best left to the experts. I made two separate batches, both according to the recipe, and they both turned out completely fucked up. I gave up and made a chickpea/falafel fritter batter and prepared them that way.

Everyone loved them. I thought they tasted good but were a little dense. I might try to make them again, but not when I have twenty people over for dinner...


The Tomato, Sumac and Pomegranate Salad was incredible, but tricky, as here in NYC, you can't get tomatoes and pomegranates at the same time.
The tomatoes were at the height of the season and were fruity and tangy, the sumac lent a lemony/slightly bitter/tannic edge to it, and the pomegranate molasses, which I substituted for fresh pomegranate seeds gave the whole dish a concentrated fruit and tart flavor.


The recipe for Zucchini Moutabel is from the Al Halabi restaurant in the Four Seasons in Damascus. It has amazing flavor, but it's another difficult one: You essentially fry very thin slices of zucchini, then mash them with garlic and lemon. A LABOR INTENSIVE dish, and probably best attempted when cooking for small groups. That said, the ultimate payoff is crispy, garlicky, lemony and salty--- nothing to complain about on your fork. Just... Well, you know, there are no prep cooks in my kitchen, and Karl says he doesn't count.


Pilaf with chickpeas, pistachios and apricots is composed of ingredients that are Ramadan fixtures. I basically covered dried chickpeas in water, with a head of garlic, and thyme and rosemary and simmered for a couple of hours. I made long grain rice, and before serving, I added some vermicelli I had cooked separately. I toasted the pistachios, cut up dried apricots and combined it all with the rice.

Muhammara, Deconstructed was my own bright idea. I roasted eggplants, skinned and mashed then with roasted garlic and stirred in cumin, olive oil, a touch of lemon juice and chopped parsley.

I topped the whole thing with roasted red peppers (in the open gas flame on my stove) and sprinkled toasted, chopped walnuts over the top. Ummm... YES.

Persian Fried Chicken. Three words that ought to make you weak in the knees. It's that good. 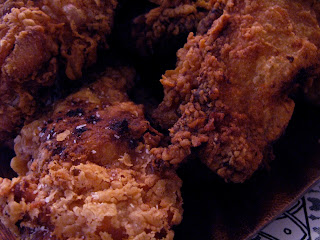 Imagine, if you will, home-fried chicken in a cast iron skillet. Doesn't suck, right? Now, imagine if you had, beforehand, marinated that chicken overnight in greek yogurt, salt, garlic and saffron so that the perfumes and herbs permeate both the meat and the chicken skin. And now, imagine that you added dried mint and cumin to the light flour mixture in which you dredged that sinful, yogurt chicken before frying it to a glorious, crispy brown. It's the ULTIMATE fried chicken.

After such an involved meal, a light dessert of roasted figs and peaches with Brooklyn Grange Honey was the perfect ending.

It was a lovely night, the first day of September. The best way to usher in the fall and pay tribute to Ramadan.
Posted by Tamara Reynolds at 5:37 PM 3 comments: