Old Skool In the Yard, or Saturday Night's Alright For Fighting 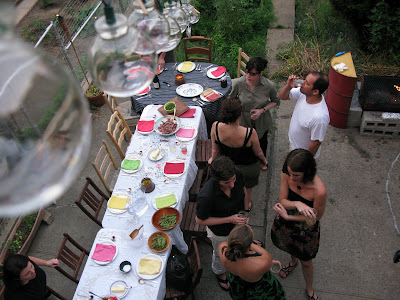 I entertain for a living, so sometimes I forget it is great to just have a huge dinner party for friends. Old friends.

We call it an "Old Skool" dinner here at the Reynolds/Wasserman Love Shack, and though I love bringing new friends into my life, there is an easy intimacy among the old skool diners that is deeply beautiful. I have an old friend who is leaving New York City this week, and it is making me think a lot about the miracle of turning strangers into friends, the giving of ourselves and of our time, and the loneliness the city doles out, even when we are surrounded by millions. It is my friends who have picked me up and held me close during my time in NYC, and I am grateful for that every single day.

I don't think about it when I meet people, but one person- ONE PERSON- can change your life. Change your direction, and the way you see things, think about things, do things.

We are never alone in a city, and it is often that one person who makes the biggest mark. If that isn't a reason to feed your friendships with love and time, I don't know what is.

This dinner was full of those who I love the most. These are the people who have been there for ages, through the good, the bad and a lot of the ugly, and keep coming back for more. They made The Sunday Night Dinner possible and helped get it up and running, so strangers from all over the world (literally!!) can come dine, week after week, in my home.

It was grand in every way, and the food was pretty good too. 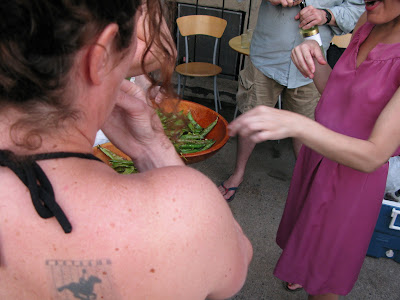 Old Skool Eaters--
How about just a plain old dinner party here at the Love Shack on Saturday night? Al Fresco, as the Thunderstorms permit. (I am ever hopeful that the weather will abate). It would be so loverly to see you all, and you know you have no intention of keeping your date on the Jersey Shore with The Situation anyway.

Here is the menu that I am thinking of (subject to change if torrential downpours jettison hopes for grilling, etc) 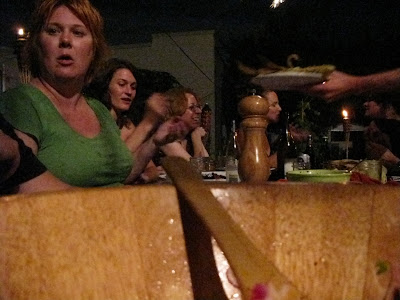 It was warm and humid, but the storms did abate for us. The Boiled Pee-nuts (Ha!) became Sucky Peas: Sugar snaps or English peas in shell that are dropped into a very hot frying pan with olive oil, left to char on both sides, then served with salt and a squeeze of lemon. Thanks to Melissa Hamilton and The Canal House! 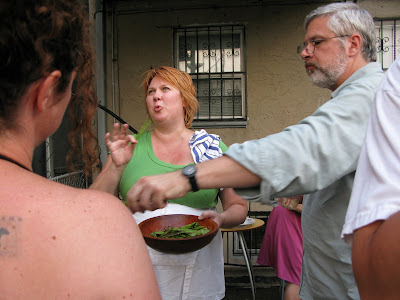 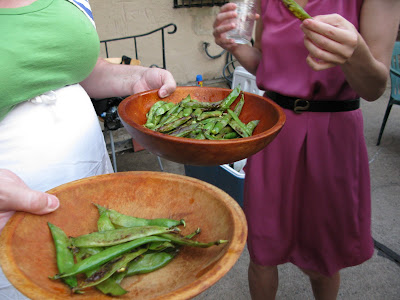 For the Panzanella, I made croutons from cheap Portuguese hero rolls, then tossed them with sliced ripe Jersey Tomatoes, cucumbers, red onion and torn basil from my garden. A quick balsamic vinaigrette with lots of garlic to finish. 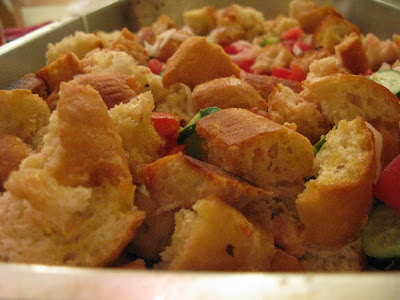 Millicent brought a bunch of marinating Pig Hearts straight from her gig teaching a Pie Intensive class at The Meat Hook. That is diligence, people! 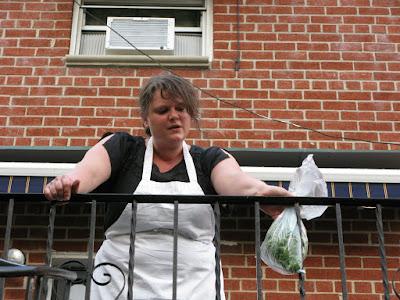 They came complete with their ventricles, so those of us who skipped class could refresh our knowledge of biology simply by observing the carving... 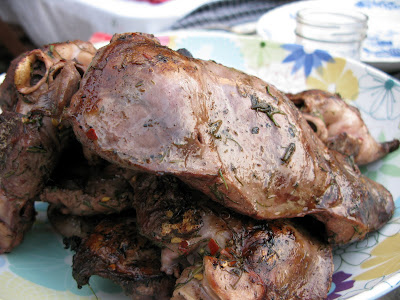 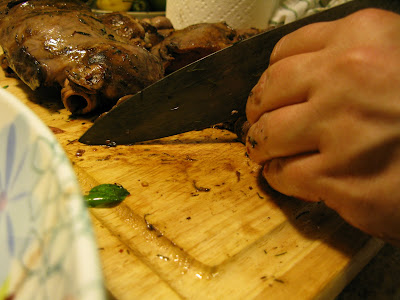 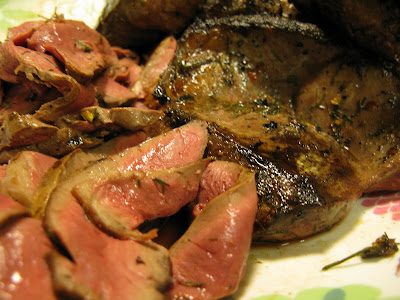 I whipped up a quick salsa verde in the food processor for them: Parsley, basil, garlic, lemon, lemon peel, capers, chili flake and olive oil. 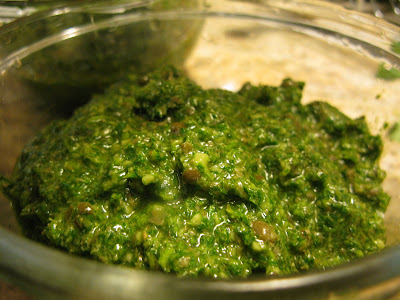 I got this crazy fresh delicious corn from Rottkamp Family Farms via Fresh Direct. (Who knew?!?!?!) It was the best corn I have had in YEARS. We soaked it and grilled it husk on, with some smoked paprika butter on the side. 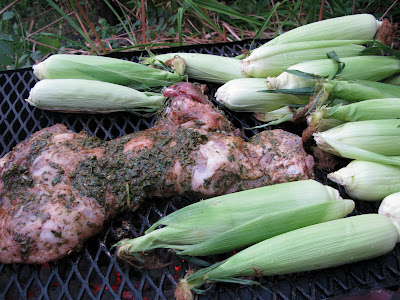 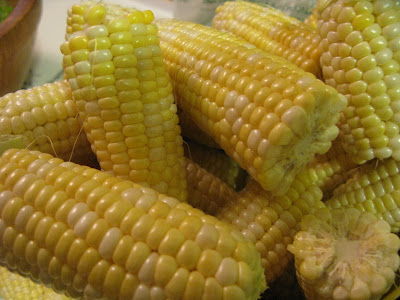 The watermelon was über ripe, and tossed with mint, feta and red onion. I threw a sherry vinaigrette over that one. 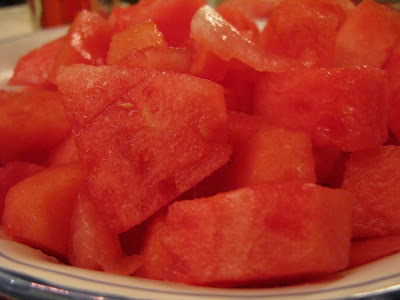 The farro salad was something I had recently at Vesta, and loved. I cooked and then chilled farro, then added some sauteed summer squash and zucchini, raw sliced radishes and baby arugula. Millicent whipped up some super lemony vinaigrette that was sweet and tangy all at the same time. 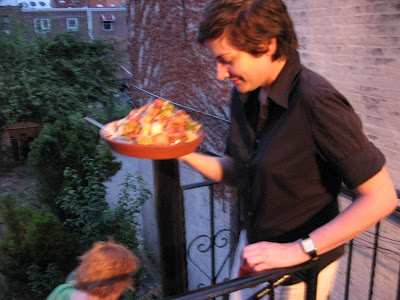 The grilled leg of lamb was my all time fave- marinated with herbs, garlic, anchovies and pomegranate molasses, then tossed on a hot grill to med rare. Truly about the most perfect dish I have ever made, and good year round. And.. (shameless plug) in Forking Fantastic! 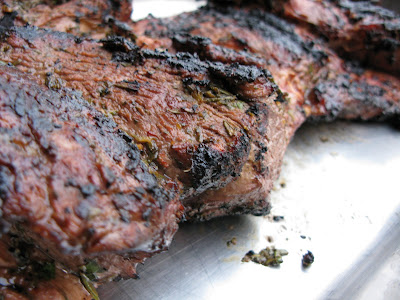 The dessert was a happy accident. I had really juicy, ripe peaches and figs. At some point I thought I would make a crust for a super rustic galette. Of course, there was no time for that, and on top of it it was So Fucking Hot. So then I got the bright idea to have Millicent bring some pie crust from her class that she had taught that day, but I didn't get the idea until she was cleaned up there and the pie crust that was available had been... compromised. Good sport that she was, she brought it, but by that time my true lazy self had taken over, and I had sliced the fruit, tossed it in a bowl and dumped some honey and dark rum on it, thinking I would have divine intervention at some later point in the evening as to what to do next with it. 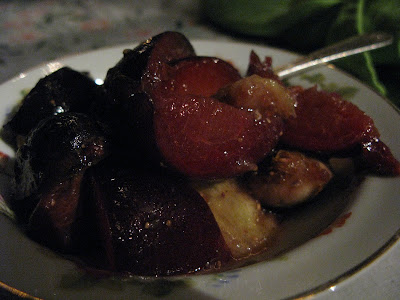 Well... the Divine Intervention was...nothing. The cream that I whipped up turned out to have gone bad, (damn heat!) so it was just boozy honeyed fruit, and DAMN. It was the best happy accident I have had in ages. Fuck pie crust! Who needs it?!!??! 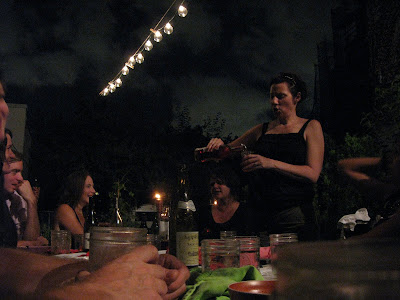 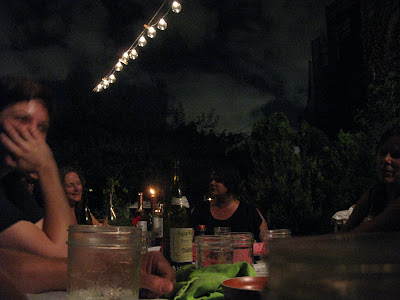 Cooking with love. One of my all time favorite activities. I hope it is always thus.
Posted by Tamara Reynolds at 11:59 AM 2 comments: